Tieton rock climbs are mostly on andesite, a volcanic rock similar to basalt. The climbing is spread out along a 20-mile stretch of Highway 12 that ranges from near-desert to subalpine. A number of crags are located in scenic groves of Oregon white oak and ponderosa pine.

There are nearly 400 routes in the Tieton, with the routes almost evenly divided between trad and sport routes. Crack climbs range from 5.3 to 5.12; sport routes range from 5.7 to 5.13. Most climbs are near vertical to vertical, with overhanging climbing found at some crags.

In general, the lower canyon has columnar rock with an emphasis on cracks, while the upper Tieton crags are blocky entablature walls that feature mostly sport routes. The climbing at all areas is usually single-pitch, with the exception of Goose Egg Mountain (near Rimrock Lake), which has routes up to eight pitches long on slabby “alpine style” rock.

Although climbing in the Tieton dates back to the 1950s, things got more serious in the 1970s, when the Royal Columns and Moon Rocks were explored in depth. Development accelerated again in the mid-to-late 1980s, including the exploration of a number of new crags. A 1989 guidebook brought more climbers to the area, then went out-of-print. The first comprehensive guidebook in more than 15 years was released in 2005 (Tieton River Rocks, Marlene Ford & Jim Yoder).

Climber impacts at most Tieton crags are still pretty small. Climbers have camoflaged bolt hangers at a number of crags. The Access Fund has organized projects to build trails and belay terraces to control erosion at the Bend, and there are developed trails at many other crags. Please stay on these trails to help preserve the area.

The primary access issue involves the seasonal closure of the Royal Columns and the Bend for nesting raptors. The nest sites are historically located on cliffs near these crags. Once the nest site(s) are established each year (usually by April 1), the closure is scaled back and a smaller buffer area around the nest remains posted and closed through July 31st. In 2006, the birds nested near The Bend, so that crag remained closed through July 31st. In 2007, the birds nested elsewhere and there was no extended closure impacting climbing.

Camping is available at Windy Point Campground and several other Forest Service campgrounds closer to White Pass. Numerous undeveloped campsites can be found off Highway 12 and off Forest Service roads in the area. The area is very dry: Please respect seasonal fire restrictions, especially outside developed campgrounds.

Watch for rattlesnakes, especially at the lower Tieton crags. Ticks can be a problem in the early season.

Because of the area’s ecological significance, The Nature Conservancy is working actively to buy private land in the Tieton. You can learn more about TNC’s efforts (and the Tieton River environment) here.

Ownership/Management:
The lower Tieton River cliffs (Royal Columns, The Bend, and Moon Rocks) are on land administered by the Washington State Department of Fish & Wildlife.

Current status:
There used to be annual closures but the birds moved their nest so that, in recent years, the spring closure area has been downstream of (but near) The Bend. Royal Columns and The Bend have remained open, but climbers were asked not to go into the posted area to the east of The Bend. The closure area may change if the birds relocate their nest.

Access considerations:
The annual Spring nesting closure is subject to change if the Eagles move their nest. The nesting season is from February 1 to April 1 each year; and may be later (July 1 or so) if an active nest is near a crag. Climbers should respect these closures (see “Current status,” above).

A Washington State Discover Pass is required to park at the Royal Columns, the Bend, and Moon Rocks ($30/year). Information about Discover Pass.

Local climbers have avoided bolting and intensive cleaning on the Tim Pond Wall (near the junction of Highway 410 and Highway 12) and the Tieton Wall (near the Royal Columns). Please respect this tradition. 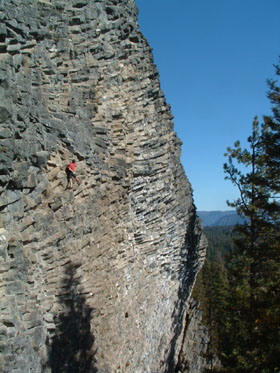