Tumwater Canyon, and especially Castle Rock, is the historic heart of Washington rock climbing. The first ascent of Midway was made by Fred Beckey, Wes Grande, and Jack Schewbland in 1948. While it may not have been the first modern crag climb in Washington, it probably comes close. Later, in the 1970s, Midnight Rock became the place for hard crack climbing in Washington, including standard setters such as R.O.T.C. (5.11c) and Supercrack (5.12c).

Today, the Tumwater is known for some fine new crags, including some steeper sport areas, and an abundance of bouldering areas new and old that have seen swell of interest in recent years.

The current annual mandatory raptor closure at Midnight Rock and Noontime Rock are annually closed for nesting raptors. This closure is usually instituted in the late spring and lifted in mid-July, after the raptors are done nesting.

Camping is available at Tumwater Campground or at numerous campgrounds in nearby Icicle Creek Canyon.

Current status:
All areas are open.

Midnight Rock and Noontime Rock are seasonally closed for raptor nesting, April 1 through July 31. All other crags are open year round.

In some places, there are threatened or endangered plant species growing in cracks and near crags. If you are interested in establishing a new route, please ask for information on these plants at the Leavenworth Ranger Station. 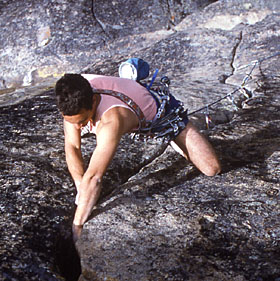