Peshastin Pinnacles is a sandstone area known for slabs and oddly rounded cracks. Before Frenchman Coulee, Peshastin was the most popular “off season” climbing area in Washington. It is often dry when rains drench Western Washington, or even Leavenworth 15 miles west. Peshastin climbs range from one to four pitches, with many ending on narrow rock crests atop the pinnacles. A number of climbs involve pinching small pebbles. Most climbs are in the 5.8 to 5.10 range, although there are a number of popular easier routes and a few 5.11s. Many routes are bolted, although sporty runouts are common. The rock varies from good to decomposing sand.

Peshastin has a long history. The area was first explored in the 1940s, and by the 1970s it had grown into a popular late fall to early spring destination. Up until 1991, the Pinnacles were privately owned. Climbers had to park on a farmer’s access road and hike through an orchard to reach the crags. In 1986, the area was closed largely due to the owner’s liability concerns.

In 1991, Peshastin Pinnacles was reopened as a State Park. The reopening followed years of effort by volunteers. The Trust for Public Land facilitated the purchase, with support from partners including the Access Fund and REI.

State Parks has developed a climbing management plan for Peshastin. Under the plan:

Because of the sandy soil, erosion is a constant concern at Peshastin. This problem was aggravated by a fire that swept through the area in 2003, and climbers groups, the Washington Trails Association, and State Parks have put a tremendous effort into restoring the area and the trails. Please stay on the trails and belay with care at cliff bases. Noxious weeds (especially toadflax) are also a concern at the Park; you will see an informative sign identifying this plant pest near the entrance to the park area.

Outlying sandstone crags near Swauk Pass (along Highway 97) lie on Forest Service land (Wenatchee National Forest). Some other sandstone crags in the area are on private property. Please respect property rights and obey all no trespassing and no camping signs.

Current status:
Open. The park was to be mothballed until in 2011 the Washington Climbers Coalition funded maintenance of the toilet facility.

Access considerations:
The State Park has limited hours (6:30 a.m. to dusk) and is closed in the winter (typically end of November to mid-March).

Climbing in the park is subject to a climbing management plan. 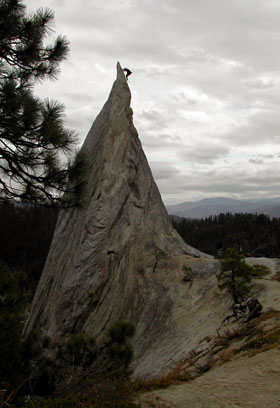 David Parker on Chumstick Snag (not in Peshastin State Park, but nearby).