Located a long way from anywhere (except Electric City), the granite domes and boulders at the north end of Banks Lake have long flown under the radar. Perhaps inevitably, the area is now becoming discovered. In 2001, the first guidebook information to the area appeared, documenting nearly 50 routes. Two guides published in 2006 (Rock Climbs in Central Washington, by Rick LaBelle, and Weekend Rock by David Whitelaw) now document a combined 160 routes. Even at that, many more routes doubtless exist in an area that has been explored – largely undocumented – for decades. Banks Lake has also been subject to something of a bouldering renaissance in the last decade, with the concentrated circuit in Northrup Canyon seeing a renewed interest and a number of smaller outlying areas being developed.

Banks Lake granite is an anomaly in a sea of central Washington basalt. It’s located at the bottom of the Grand Coulee, a fifty-mile long, 700-foot deep canyon carved by Ice Age floods.

The upper part of Grand Coulee is now flooded by the Banks Lake, which holds irrigation water pumped in from the Columbia River. The area has a cool desert ambience, with striking contrasts between the light tone of the granite, the black basalt of the Coulee walls, the dusty gray-green of the area’s sagebrush scrub, and the blue water of the lake.

The granite itself is on the Coulee floor, rising in a series of boulders and domes on both sides of the lake. A lot of the rock is on the grainy side, although there are pockets of bullet stone.

The lake has flooded some of the domes, turning them into granite islands. For a time in the 1980s, much of the climbing exploration focused on these islands. A June, 1987 article in Climbing magazine described a new genre of “boat climbing” at Banks Lake, including routes rigged to start directly from a canoe belay.

More recently, climbers have focused on the easily accessible crags along the east side of the lake and, to a lesser extent, the more remote domes on the west side of the lake. Most of the new climbs are sport routes, ranging from 5.7 to 5.13b and up to four pitches long. Bouldering has also become a focus, with a number of difficult problems being established in Northrup Canyon and in small pockets around the golf course.

Much of Northrup Canyon and the area to the north (Castle Rock) are designated as a state Natural Area Preserve (NAP). All recreation is prohibited in NAPs. Please do not explore in these areas. If in doubt, contact the State Parks ranger station.

Banks Lake is a good off-season destination. Temperatures can reach into the 100s during the summer. Like Frenchman Coulee, climbable conditions can be found even on some winter days, and if a deep freeze is on, the area is one of Washington’s leading ice climbing areas. Camping is available at Steamboat Rock State Park and at a primitive State Park campground immediately off Highway 155 (near the climbing).

Watch for poison ivy and rattlesnakes. If approaching climbs by water, watch for ski boat wakes and flying bass hooks.

Current status:
Open, except for crags within the Natural Area Preserve (see below).

Access considerations:
Much of Northrup Canyon (and the area to the north) is a designated Natural Area Preserve (NAP). Climbing (and other recreation) is prohibited in NAPs by state law. 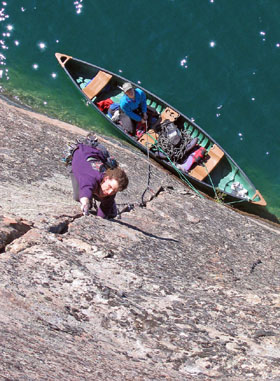