Although climbers speeding along Highway 20 have cast wondering glances at the cliffs of the Skagit River Gorge for years, the largely crackless nature of the cliffs, a lack of easy parking and access, and a general lack of information all conspired to keep the area largely undeveloped.

In the late 1990s, however, climbers began exploring and establishing routes on two cliffs close to Newhalem and one at the far end of the Gorge, near Diablo Lake. To date, more than 20 sport routes have been established, ranging from 5.9 to 5.13. The potential for much more climbing exists. A partial online guide to one of the cliffs can be found at Newhalem online guide.

Newhalem’s rock is Skagit gneiss, a metamorphic rock that resembles granite. Although there are occasional loose flakes, the rock is generally sound and high-quality. Many walls are consistently overhanging. The walls are also deceptively large, growing in scale when you reach the base. There are very few cracks.

All the Newhalem crags are located within the Ross Lake National Recreation Area, which is administered by the National Park Service. The Park service is in the process of creating a new general management plan for the area but budget concerns have slowed the process and any new plan may be several years away.

In the summer of 2002, rangers grew concerned about intensive climbing development at what is known as the “Newhalem Crag” near the town of Newhalem. Climbers’ removal of moss and vegetation, and their moving of rocks and creation of landing zones for bouldering was of particular concern, although the sport crag nearby also gave rise for concern. The NPS determined that an evaluation of environmental impacts from these climbing activities needed to be undertaken so they could assess impacts to vegetation and possible cultural resources (e.g., historic rock shelters and other traces left behind from when the Skagit Valley was a major trading route for Native Americans living on both sides of the Cascades). Once this evaluation was completed, the NPS intended to develop a climbing management plan.

In response to their immediate concerns, an NPS resource manager contacted the Access Fund and we at the Washington Climbers Coalition contacted local climbers who agreed to voluntary refrain from further route and bouldering development until a climbing management plan could be put in place. The NPS completed “scoping” of the environmental analysis in late 2003 but budget shortages and a reallocation of staff resources to deal with a massive washout of Highway 20 delayed work on the climbing management plan. The NPS now plans to work on that plan as part of a renewed general management plan for the National Recreation Area.

2008 Agreement: In March 2008 we reached an agreement with the National Park Service providing that the voluntary moratorium on the establishment of new climbing areas was lifted at three specific sites in the Skagit Gorge: the “Town Crag” in the town of Newhalem, the “Newhalem Crag” just to the east along highway 20, and the “Diablo Crag” where the Diablo road turns off HIghway 20. The moratorium continues to apply elsewhere. Further, a moratorium on new bouldering sites will continue until completion of the General Management Plan at which time the National Park Services promises to re-examine this policy. In discussing this interim agreement, Park Service personnel commented that they greatly appreciated climbers’ voluntary compliance with the route development moratorium at the crags where they were now going to permit renewed exploration, and they hope the ongoing moratorium will be respected. The 2008 agreement is titled “Agreement regarding establishing new rock climbing routes in the Skagit Gorge area, Ross Lake National Recreation Area, pending completion of the General Management Plan.” (Copy of Agreement in PDF format).

Current status:
As of October 2016, the crags are open but there is a small closure are due to a concern for falling rock.

Access considerations:
Climbers are urged to take care in walking near moving traffic on highway 20. Walking along the narrow roadside is dangerous and pedestrians should walk outside the guardrails if at all possible, cross with care, etc.

Please do not park illegally in Newhalem or along Highway 20. 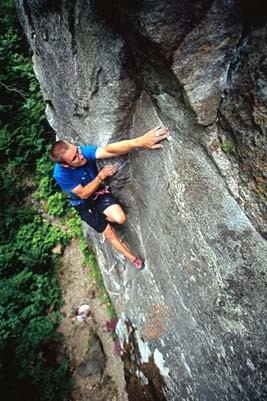