Static Point is a granite dome of amazing quality. Large sweeps of rock soar upward with nary a crack in site, and much of it is nearly completely devoid of features. Fortunately for the climber, it isn’t too steep either; the climbs on Static Point rarely exceed 45 degrees. Most routes are friction climbs in the 5.9-5.10 range, stretching up to seven pitches long.

The area was first developed in the early 1980’s. There is a popular story about how it was first “discovered” by airplane. Although the climbers most active in the early days indeed first saw the crags from an airplane, somebody else beat them to it and put up a couple of routes first. As with many areas in Washington, a logging road first brought climbers to the area.

Static Point is located in a relatively remote side valley near Snohomish County’s Spada Lake Reservoir. The PUD operates the area jointly with the DNR and the Forest Service and road is often gated several miles from the trail head during the Winter. Overnight camping is prohibited near the lake shore.

Roads in the valley immediately below Static Point were largely decommissioned in the late 1990s. The spur road leading to the “trail head” is now growing back over with alders. Currently, a walk of about 45 minutes to an hour is required to reach the cliff.

While there have been no noted environmental concerns or other problems associated with climbing activities at Static Point, there may be changes looming. DNR land managers propose to decommission the road at Olney Pass, back where it enters the watershed about three or four miles short of the present trail head.

Ownership/Management:
Static Point is on land managed by the Department of Natural Resources of the State of Washington. Access is via roads operated and maintained by Snohomish County (from Highway 2 as far as until Olney Pass), and jointly with the the Forest Service, Department of Natural Resources, and the Snohomish PUD (beyond Olney Pass). The PUD operates nearby Spada Reservoir in partnership with the City of Everett.

Current status:
As of November 2016 the main Olney Pass road is open beyond the turn off for Static Point but the PUD has decommissioned that side road heading into the South Fork of the Sultan River.

Access considerations:
Access to the crag passes through a restricted area managed for watershed protection (Spada Lake Reservoir is the water supply for the City of Everett). Signs indicate that no overnight stays are allowed, but we’ve recently learned overnight stays ARE allowed outside a relatively narrow area right around the lake.

Climbers are asked to sign in as they enter the area, where there is a kiosk and bathroom along side the main access road about 13 miles from Highway 2. We urge climbers to sign in to help document climbers’ use of the area.

Maintained access expected:
Current management planning efforts are underway but the prior plan to decommission the main access road shortly beyond Olney Pass appears to be abandoned. The “South Shore road” will be maintained to a boat ramp beyond the access for climbers headed to Static Point.
disclosed in recent discussion related to the re-licensing of the nearby Spada Reservoir. FERC Re-licensing Process 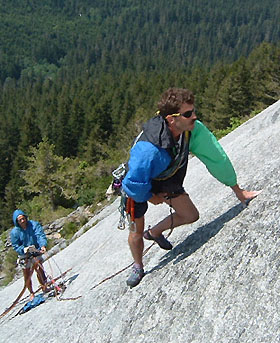 Smoker, on OnLine, 5.10a, Static Point.
Photo by Jay Brazier.