Developed by Spokane climbers beginning in the mid-1990s, Marcus and China Bend were the first limestone crags to see significant climbing attention in Washington.

The Marcus crag is on the east side of Lake Roosevelt (a.k.a. the Columbia River), about 10 miles north of Kettle Falls and above the small town of Marcus. The cliff’s consistently overhanging with a sizable cave. It’s a high-end sport area: of the 30 routes listed in a 2001 guide (Inland Northwest Rockclimbs, by Marty Bland), one is 5.8, one is 5.10, and everything else is 5.11-5.13. A number of even harder projects are waiting to be redpointed. The cliff faces west and stays in the shade until early afternoon.

China Bend is across the river, about 10 miles north of Marcus as the crow flies. Like Marcus, nearly all the routes are in the 5.11-5.13 range, although there’s potential for some more moderate routes if someone puts in the effort. The 150-foot high wall has some very long single-pitch routes. The cliff is on a scenic bluff above a bend in the Columbia River. It faces due south, which makes for some fine climbing in winter, but often insufferable conditions in summer.

There haven’t been any apparent access issues to date at either crag. Similar to Metaline Falls, climbers are encouraged to keep a low profile at the cliffs, respect locals, and patronize area businesses.

Both developed and undeveloped camping is available in the area. Watch for poison ivy and rattlesnakes, especially at China Bend.

Current status:
As of April 2014 there is a seasonal nesting closure in place at China Bend and it is expected to last through July 15. Marcus is open. 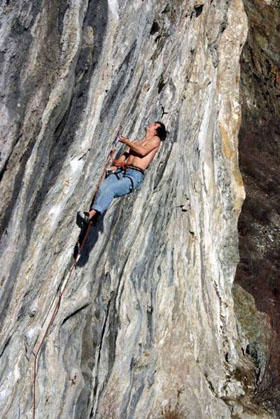 Mike McClure on I’m Your Hero, 5.13a, China Bend.
Photo by Marty Bland. 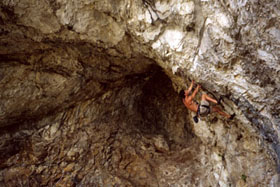