Washington Pass is really more of an alpine rock climbing area than a crag area although some cragging is found here. Many of the routes reach peaks of over 7,000′ in elevation. As noted above, the area is hit by more thunderstorms than other areas in the state and it is also high enough that snowstorms can strike even in the summer. With a relatively short approach hike from the highway, this area makes a great place for a day climb that takes one into some truly spectacular high country.

These granite rock climbs feature both crack and face climbing, on rock ranging from very solid to extremely rotten. The climbs are generally 2 to 12 pitches; most descents include rappels. The routes range in difficulty from easy fifth class to 5.13.

The area has a long history. South Early Winter Spire was first climbed in 1937 and Liberty Bell Mountain in 1946. The famed Liberty Crack route was added in 1965, and most other of what are regarded as the “classics” were climbed prior to the completion of the North Cascades Highway (Highway 20) in 1972. Today, there are dozens of excellent climbs in the area. The development has remained mostly trad; there are not many climbs that can be described as sport routes.

There have been few reported access or environmental concerns regarding climbing at Washington Pass. Erosion can be a problem as the soil is rather sandy and many of the approach routes follow loose gullies. Highway 20 is closed each winter, usually from the middle of November through the middle of April.

The climbs at Washington Pass lie entirely on National Forest lands. There are several campgrounds in the area.

Information on select new routes can be found at the North Cascades Mountain Guides’ website here.

Other resources:
Weather forecast (note: peaks near Washington Pass experience more thunderstorms than other areas nearby and available forecasts may not reflect this) 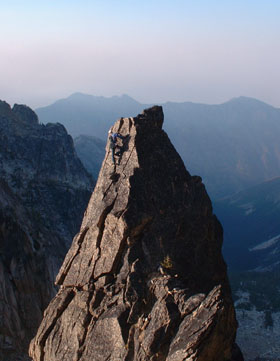 Nearing the top of a pinnacle in the Wine Spires.
Photo by Doug Littauer.