Crowds and parking problems at Little Si caused climbers to branch out in the early 1990s and explore other cliffs along Interstate 90. In 1994, the Exit 38 cliffs (a.k.a. Deception Crags) were announced to the world through a mini-guide in Rock & Ice magazine.

The rock at Exit 38 is metamorphosed volcanic rock similar to Little Si, but generally more fractured. In general, the higher up one goes on Mt. Washington, the better the rock becomes.

While a few routes check in at 5.13 (and a number more are in the 5.12 range), the routes at Exit 38 are generally more moderate than at Little Si, including a good number of routes below 5.10. Virtually all the routes are sport climbs. A number of areas are popular with beginning climbers. Many cliffs become quite crowded on weekends and summer evenings. A select online guide to routes at Exit 38 can be found at North Bend Rock.

Climbers have enjoyed a positive relationship with State Parks at Exit 38. The Access Fund organized two trail projects in the late 1990s, including one that built much of the trail to and around Write-Off Rock.

Vandalism and car-prowling have been problems at Exit 38. Don’t leave your wallet or valuables in your car.

Ownership/Management:
Most of the Exit 38 crags (Write-Off Rock, Deception Wall, and the upper Mt. Washington crags) are within Iron Horse State Park, which takes in a strip of land on either side of the Iron Horse Trail and a good chunk of Mt. Washington. Nevermind is just outside the state park within the Mt. Baker-Snoqualmie National Forest. Amazonia and the Actual Cave/Club Paradiso appear to be on a private inholding within Iron Horse State Park. The Far Side cliffs on the north side of I-90 are on state DNR trust land.

Current status:
Deception Wall was closed for Peregrine Falcon nesting in the Spring of 2012 but as of April 2014 there has been no closure announced for this year. More information here.

If belaying directly from the Iron Horse Trail, please keep yourself and your ropes, packs, etc. to the side of the trail. Climbing access depends on avoiding conflicts with other trail users. 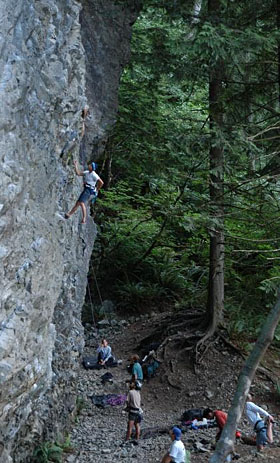