The valley of the Middle Fork of the Snoqualmie River (about fifteen miles outside of North Bend) has granite cliffs quite different from the main North Bend areas. The most notable is a granite slab called Fee Demo Wall, which has demanding routes in the 5.9 to 5.12 range. (See topo at Mountain Project.) The Middle Fork also has the rugged buttresses of Mt. Garfield, which (among other routes) features Infinite Bliss, a 23-pitch bolted route.

Infinite Bliss (5.10b) drew a lot of attention in 2004 after it was publicized in Rock & Ice magazine. The route is within the Alpine Lakes Wilderness and controversy developed over whether it was established illegally with power drills. Questions regarding the route have been resolved with the Forest Service and the route will remain in place; however, the WCC urges climbers to respect the prohibition on motorized equipment in wilderness areas and to exercise restraint in establishing bolt-dependant routes in wilderness.

Although Rock & Ice touted Infinite Bliss as the “longest sport route in America,” not all “adventure” is removed from the route. You should expect a very long day, with some routefinding difficulties, long runouts, and long not completely straight-forward descent (via rappel and some very exposed scrambling). Because of some loose rock on the route (and the fact much of the route follows a rockfall funnel), you should think about avoiding it if more than one or two parties are ahead.

Vandalism and car-prowling can be problems in the Middle Fork. Don’t leave your wallet or valuables in your car.

Current status:
All crags are open.

Access considerations:
Generally speaking, all areas in the Middle Fork above the 1800-foot elevation contour (including nearly all of Mt. Garfield) are within the Alpine Lakes Wilderness Area. Power drills are prohibited in designated wilderness areas. The Fee Demo Wall and Stegosaurus Butte are both outside the wilderness boundary. 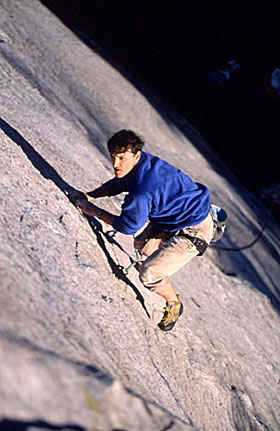 Sean Courage on Smokey Bent Me Over, 5.11a, Fee Demo Wall.
Photo by Andreas Schmidt.