Seasonal nesting closures in support of Peregrine Falcon populations occur at many sites in Washington. Climbers and land managers are increasingly working together to identify nest sites and this has allowed us to have the closure area and the closure period more narrowly tailored so that we have broader climbing access in some areas. 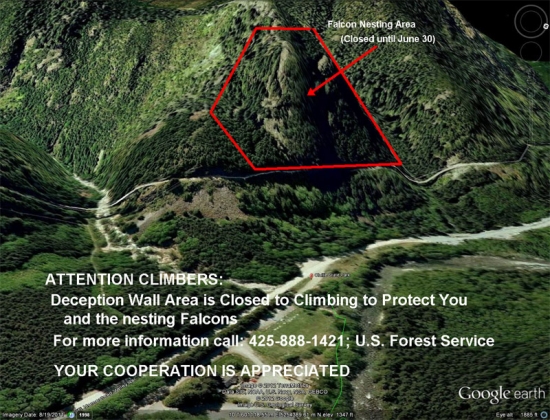 Climbers reported an active falcon nest on Deception Wall at the area known as Exit 38, near North Bend, in the Spring of 2013. Forest Service and Department of Fish and Wildlife officials imposed a nesting closure and issued a press release with the graphic linked at left (or below, on some devices). The closure area shown, drawn on a Google Earth map that did not accurately show the crags in the area, was huge — over a square mile. The Washington Climbers Coalition offered to create a more accurate graphic that would more clearly delineate the area requiring protection. Reluctant at first, the ranger and wildlife officer agreed to accept the new graphic when they saw that it showed the area more clearly.

The Washington Climbers Coalition posted the revised closure notice on social media, and in climbing gyms and equipment suppliers. It was posted on the access trail and at the site.  Climbers cooperated with this closure, waiting until after the cliff was reopened in July to climb there. The birds were undisturbed.

Part of the process of issuing these closures may involve a public meeting. WCC representatives, local Audubon representatives, government officials and a few assorted others showed up for a meeting at the Snoqualmie District Ranger Station. Channel 13 news was there. As we entered the ranger station, they had a reporter doing the set up piece: a 15 second teaser to play at the beginning of the TV news. In a sensational newscaster voice the announcer promised to go inside and find out what all the conflict was about. When they actually went inside they found all of us shaking hands and smiling, eating somebody’s homemade cupcakes. Everyone was giving speeches about cooperation and the public benefits of conservation and recreation. There was no conflict. The TV crew found the story uninteresting. They left. 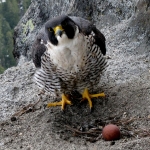 This falcon was photographed by Lisa Doubet on Outer Space, a popular climb near Leavenworth, Washington, in 2009. Lisa and her partner learned to their dismay that there were some angry birds on Library Ledge. Real angry. Mother falcon had an egg there and she didn’t want climbers coming anywhere near. Lisa and her partner Jon reported this discovery to the local wildlife officer in the Wenatchee River District ranger station and the climb was closed until after the young fledged from the nest. In other years the birds have nested in an out-of-the-way part of the cliff and no closure has been necessary. Read more about her encounter here. Read more on Lisa’s blog, here.