Minnehaha is Spokane’s oldest and most popular area Located on the northeast edge of the city, the area offers an assortment of short (20’-80’) routes on featured granite generally ranging from 5.4 to easy 5.12, as well as a nice circuit boulder problems. There are relatively few pure crack climbs and few true sport routes. Many routes offer sporadic and sometimes marginal protection. As a result, toproping is popular at Minnehaha. There is a good assortment of moderate bouldering in the park, along with a few difficult problems including the classic Smokey on Fire V8.

Climbing at Minnehaha dates back to at least the 1950s. In the early 1970s, well-known alpinist John Roskelly began establishing a bevy of routes, including some that are now rated 5.11.

Minnehaha has been the centerpiece of climber activism in Spokane. Climbers were active in the effort to turn the area into what is now John H. Shields Park. More recently, ambitious graffiti removal projects sponsored by the Spokane Mountaineers have changed the face of Minnehaha and greatly improved its appeal. 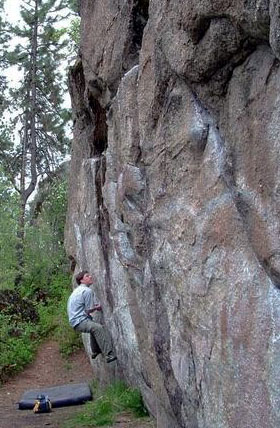 Micah Lauer tests out To Have and Two Holds, V7, Minnehaha.
Photo by Micah Lauer.