Why do stewardship projects?

Stewardship projects allow us to take care of the places where we climb. These efforts improve the climbing experience and help maintain access by keeping these areas in good condition and demonstrating to land managers and others that “we care.” 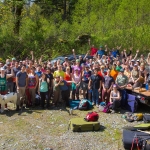 The Gold Bar boulders are an amazing place but access there has been problematic. Years ago, the road was open to all. For a period of time WCC members had special access. The gate is now closed. As part of an ongoing effort to maintain good relationships and climbing access, over 75 volunteers showed up to a stewardship event on April 16, 2016.[/caption]Former timber company land is now managed by Washington Department of Natural Resources (DNR). The Gold Bar Boulders largely stand on DNR trust land, which they are required by law to manage for timber harvest in support of public schools. As part of their timber management the road is going to be decommissioned but there may be an opportunity to build a new and shorter trail. 75 climbers showed DNR that “we care” on April 16, 2016, and smaller but able bodied parties worked there three weekends in July 2017. DNR left shade trees at key boulders during a recent thinning project.

Reducing impact and improving the climbing experience at Vantage 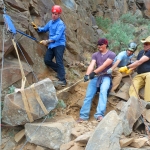 The climbing destination known as “Vantage” exploded in popularity in the 1990’s. The environment is fragile and the area requires tender loving care. The Access Fund and the Washington Climbers Coalition have been doing stewardship projects here for 25 years and, with the help of the American Alpine Club, The Mountaineers, the Mazamas, and the Spokane Mountaineers, we raised funds to install a toilet here in 2014 (gone are the “desert flowers” — wads of toilet paper blown around the desert landscape). We are raising money for a second toilet in 2017.

The Washington Climbers Coalition has been doing trail projects here since 2013 and annual cleanups before that. A 2015 crew is pictured here, building stone steps on the trail over the mesa between Frenchman Coulee and Echo Basin. The rigging shown here allows us to move large rocks weighing hundreds of pounds so that we can build steps out of local stone rather than using imported timbers. This trail was badly eroded and vaguely treacherous before we did some stabilization here in 2014 and 2015.

Fixing it while we can at Index 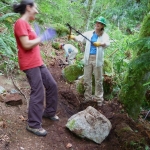 The Washington Climbers Coalition owns the land at the Index. We are going to donate it to Washington State Parks but, before we do, we have an opportunity to rebuild trails and make other improvements designed specifically to improve the climbing experience there. We’ve been doing trail projects and cleanups at Index since 2005. In 2012 we regraded the parking lot and we’ve been providing a porta-potty at the lower town wall since then. The Access Fund Conservation Team helped with trailwork in 2012 and we’ve been doing projects every year since then. We’ve organized work days with the Access Fund, the American Alpine Club, The Mountaineers, and with local businesses including Outdoor Research, REI and Cascade Designs. We’ve worked with Boy Scouts of America and local volunteers from the town of Index. All of this has been designed to make your climbing day better and doing so in a manner with minimum visual or other impact.

Giving back in Darrington 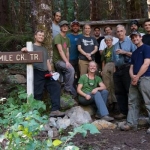 The road in Darrington was threatened with closure over ten years ago and the only reason it was not closed was that the WCC and the Access Fund  brought a campaign of letters and phone calls to the local Forest Service authorities. We have a good relationship with them, though, and both before and since that time we’ve been doing volunteer road and trail projects in the area and we’ve also been working with the County and other recreational groups to promote human powered recreation as an activity with economic benefit in the immediate area.

The road serving the Darrington Area crags with the longest climbing history is slated for maintenance through a pilot project undertaken by the Darrington Collaborative. This effort is expected to shore up the road for years to come as well as to reduce impact on the adjacent Clear Creek.

These projects are fun 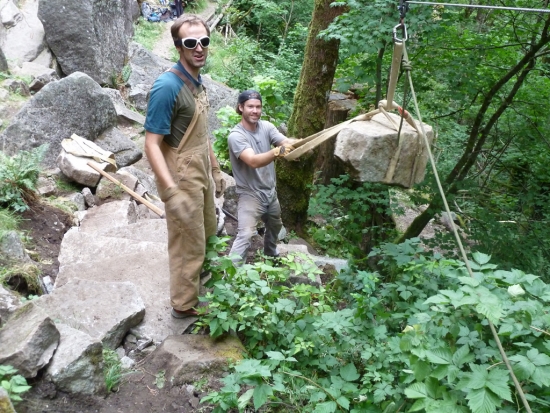 These projects offer an opportunity to meet other climbers and we always try to schedule them so that we get some good work done but so that there is time to climb afterward. The day almost always begins with coffee and a tool talk where we discuss safe practices so that nobody get’s hurt by an errant polaski or a rolling stone (that would not be fun). We then break up into work teams and each team has a crew leader with prior relevant experience. There may be a barbeque or other event afterward.

Most of our projects make improvements that last for years or more. You not only get to go climbing but you get to come back, years later, with pride. 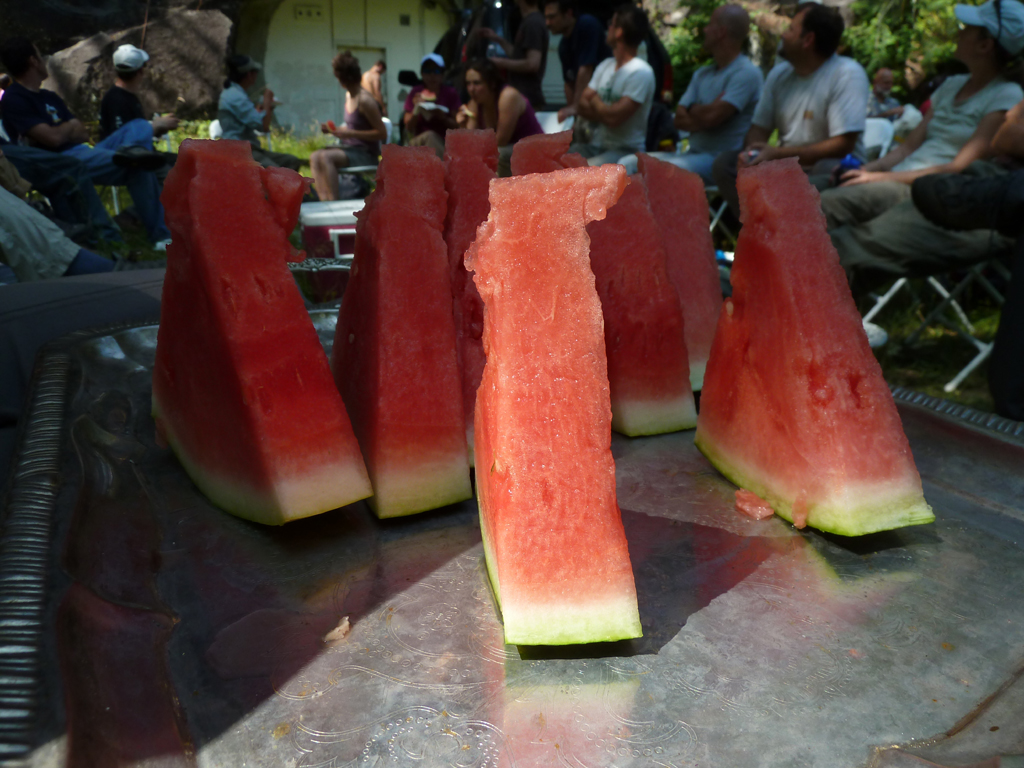 Volunteers relaxing in the shade after working on the 2012 Index trail project. Matt Perkins photo.