Leavenworth is perhaps the densest climbing area in Washington State, with a wide range of bouldering, sport and trad cragging, and access to some of the state’s best alpine rock. Leavenworth is also the birthplace of Washington’s technical rock climbing in the state, and was the focal point of rock climbing in the state for many years. Today, Leavenworth remains one of the most popular and varied climbing areas in the state. The area boasts almost a thousand boulder problems along with a wide variety of crags, with climbs ranging from three-bolt clip-ups to long 10-pitch adventures. The rock is predominantly granitic, although at least one crag is made up of Chiwaukum schist.  In addition to the Icicle and Tumwater Canyons featured separately here, there is a small amount of bouldering developed at the Mountain Home Road area on the side of Boundary Butte at the mouth of Icicle Canyon.

The bulk of Leavenworth’s climbing is found in and around two canyons west of town:

There have been very few signs of any impending access crisis at Leavenworth’s public land crags in recent years. The Forest Service has expressed some concern over route-cleaning and impacts to sensitive plant species, and is also concerned about noxious weeds being spread by climber traffic.

We have taken an active interest in the management of climbing on this district for 15 years, mostly without a budget to support it. During this time we have done a variety of things to try to improve conditions for climbers.

Examples include building the trail at Castle Rock, providing off-street parking at Barney’s Rubble, hardening a number of climbing approach trails, and pulling noxious weeds that are sneaking off the roadway and up the hill towards the rocks. Despite the presence of known rare plant populations on climbing rocks, we have not instituted any restrictions, but rather, put the appeal out to climbers to work with us as they locate new routes so we can survey for plants in cracks.

Access to climbing is only limited in a couple ways on this district. We have a seasonal closure on two adjacent rocks due to raptor nesting issues and we limit overnight use to the Enchantments–a management issue that transcends climbing. Of course during fires there are often other closures to public entry in effect as needed to secure the area for fire operations and public safety. I know that not all climbers agree with the rationale for these restrictions, but I am hopeful that the majority of climbers respect the environmental concerns (and with fires public safety concerns) that prompt these actions.

Leavenworth has had its fair share of bolting controversies in the past, but climbers have by and large handled conflicts reasonably among themselves. The main challenge for Leavenworth in the coming years will relate to how the significant influx of boulderers in the area comport themselves, minimizing their impact and acting as stewards of the land. 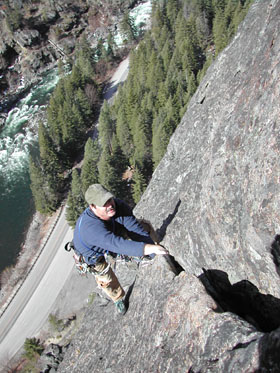