Beacon Rock is an 800-foot basalt monolith rising above the Columbia River at the west end of the Columbia River Gorge. It is the scene of what must be one of the first technical rock climbs in the Pacific Northwest. On August 24, 1901, Frank J. Smith and Charles Church of Portland, along with George Purser of White Salmon, climbed a route on the northwest face using iron spikes and ropes. For more information on the unique climbing history at Beacon, visit the Beacon Rock Climbing Association Blog.

Most of today’s climbing is on the South Face (facing the river), which is a 400-foot high wall of columnar basalt. The routes typically follow cracks in dihedral systems. Routes generally range up to five pitches. There are a very few bolt-protected climbs. Routes range from 5.7 to easy 5.12, with a concentration in the 5.10-5.11 grades. The routes tend to be sustained and Beacon ratings are generally considered stiff.

In 1996, State Parks developed a climbing management plan for Beacon Rock. The plan regulates things such as bolting and cleaning. The plan needs updating, including to incorporate some changes desired by State Parks. Under the current plan:
The placement, replacement or removal of fixed protection on established routes must be approved by the park’s climbing advisory committee. (See below.)

Any new routes on the South Face and Northwest Corner involving fixed protection (bolts) must be approved by the park’s climbing advisory committee. (See below.)

If a bolt placement has been approved, power drills are allowed for bolting.

With the understanding that all of Beacon Rock is considered valued habitat, cleaning is allowed as follows: “Moss and small vegetation that are not sensitive, threatened or endangered species may be removed only from the direct line of ascent as required for climber safety.”

There is a Technical Rock Climbing Advisory Committee that has been working with the WA State Parks and Washington Department of Fish and Wildlife to update the Climbing Management Plan. Please visit the Beacon Rock Climbing Association Facebook Page to learn more and get involved!

There are two key access issues at Beacon Rock. The first is the annual seasonal closure of the South and West Faces for nesting raptors. The second is the long-time closure of the East Face to all climbing.

Beginning in the mid-1990s, State Parks (with the Washington Department of Fish & Wildlife) began seasonal closures of the South Face to protect nesting peregrine falcons. Like many nesting closures around the country, these closures are keyed to whether nesting activity is successful. If successful, the face remains closed until the chicks fledge or July 15; if unsuccessful (or if it can be confirmed that the falcons have nested somewhere other than the South Face), the Park, WDFW, and the BRCA will coordinate on an opening date as early as possible after the determination.

The spectacular, often overhanging East Face has been closed to climbing for decades. This closure is based on the presence of two endangered plant species, among other concerns. It is very important that this closure be respected if there is to be any possibility of climbing on even part of the East Face in the future.

Camping is available for a nightly fee at Beacon Rock State Park. For more information, click on the link above.

Poison oak is common at Beacon Rock, including on some routes.

Access considerations:
The South Face is seasonally closed each year for nesting raptors. The closure begins on February 1 and runs through approximately July 15 (in 2006 and again in 2007 they opened it earlier). After the falcon nesting season, climbing is allowed on the South Face and Northwest Corner. The Northeast Corner is closed to climbing. Climbing on the East Face has been prohibited for years and it remains closed.

New routes are regulated under a climbing management plan (see below).

Please don’t walk on the railroad tracks below Beacon Rock—this has been an issue with the railroad. 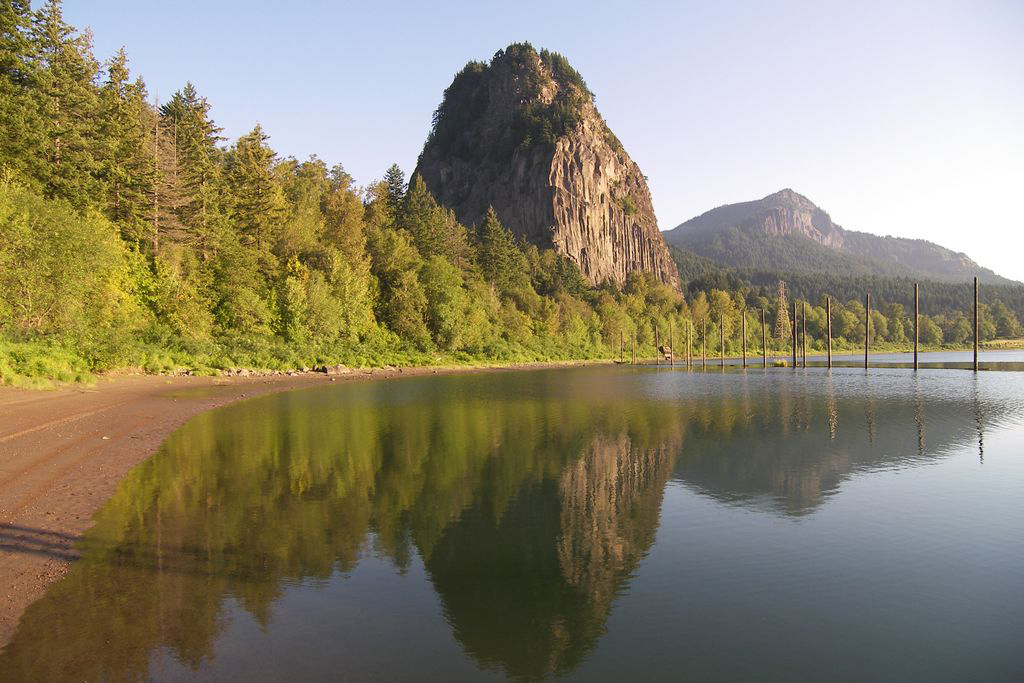 Beacon Rock’s South Face is in sun, on the right.
Photo by Dave Goldring.