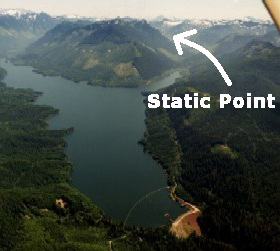 Static Point is located on land which is managed by the Washington Department of Natural Resources (DNR). DNR manages their land to generate timber revenue which is intended to support public schools. Access to the area utilizes roads maintained for the Henry M. Jackson Energy Project (Spada Reservoir) and a public planning process undertaken in 2005 and 2006 included a meeting of recreational stakeholders. At that meeting, the DNR representative looked us in the eye and said: “I don’t have to give you access and I’m not going to.”

DNR has been much more supportive of climbing at other locations but here, in 2007, they fully decommissioned the spur road leading toward Static Point, leaving huge tank traps that make the hike into the crag unpleasant. Climbing here is still allowed, but a former approach of less than an hour now takes about two hours. Overnight stays are not permitted.

For the hardy, Static Point remains a remarkable climbing destination with fantastic views and very exciting slab climbing. In 2016 climbers cleared the trail and some hardware upgrades are under way.