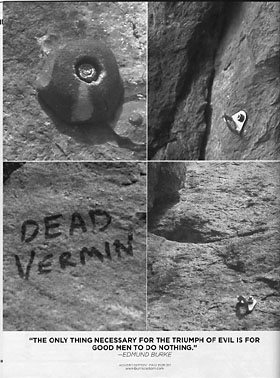 In June, 2004, a longtime Spokane area climber raised concerns about issues including the presence of two artificial (bolted on) holds, hold chipping, and retrobolting (including retrobolting gear-protected routes) at the Dishman crag in Spokane. An employee of the land owning irrigation district (himself an occasional climber) also got involved and expressed dismay. The issues became personalized and inflamed over the Internet. The concerned climber paid for an advertisement in Rock & Ice magazine, and the magazine ran an article that focused on the issues at Dishman.

The concerned climber organized a meeting to discuss the issues in August 2004. The issues were not resolved at that meeting, however, and in fact they were largely avoided. The discussion instead focused on general efforts to clean up and possibly purchase the Dishman crag. A general clean up day took place in September 2004. During the clean up, some climbers decided to remove the bolted on holds, remove some bolts, and fill in some drilled (chipped) pockets. Shortly after this was done, another climber (or climbers) came back and reinstalled the removed bolts. Another round of bolt chopping followed.

In October, the concerned climber made a presentation regarding this conflict to the board of the irrigation district that owns Dishman. The land owners questioned whether in addition to a management headache, they also had liability exposure in allowing climbing to take place on their property.

At the early stages of this conflict, the Washington Climbers Coalition got involved in contacting individuals on “both sides” of the conflict, asking them to stick with the discussion and to seek a resolution without escalating the situation. Some of these individuals were unhappy when the steering committee of the Coalition elected not to take a direct stance on the issues, but rather to try to get the climbers involved to work out a solution that they, the local climbing community, and the property owners could live with.

Eventually, the WCC helped fashion a “letter of resolution” for Spokane climbers to sign. Among other things, the letter provides that artificial holds are inappropriate at Dishman; that holds already chipped should be left undisturbed; and that no bolts should be added or removed from existing climbs.

In June 2005, the Washington Climbers Coalition presented this letter to the Dishman owners and made a presentation on land owner liability associated with allowing rock climbing under Washington law. Washington has a state law that specifically immunizes landowners from such liability, including with respect to accidents involving fixed anchors (such as bolts). The land owner board was receptive and appeared to appreciate the presentation. It appears that access to the Dishman crag is stable for now.